Cypress, CA (December 27, 2018) – U.S. Senator Kamala Harris of California has been named the 2018 recipient of the ECOS® Environmental Award for her exceptional leadership in environmental protection. Senator Harris received the prestigious award in honor of her career-long fight against pollution and toxic chemicals and her protection of critical ecosystems.

Earth Friendly Products®, the maker of ECOS® environmentally friendly cleaning products, established the annual ECOS® Environmental Award to recognize national leaders who are creating powerful impacts to protect the planet through legislative action and social change. This is the second year that the annual award has been given; the 2017 recipient of the ECOS® Environmental Award was Democratic Leader Nancy Pelosi. 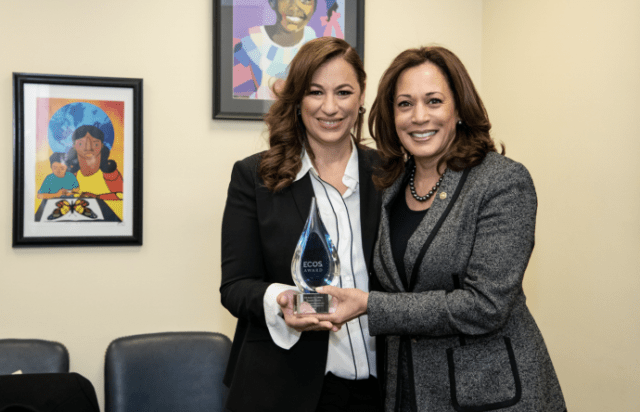 Senator Harris has a highly distinguished record of environmental protection. In 2018, Senator Harris led the Living Shorelines Act to provide grants to communities to invest in natural infrastructure to combat the impacts of sea-level rise and storms. She also voted against bills to roll back protections on land and water and rules to limit climate change, and she cosponsored bills to close tax loopholes for oil companies, ban agricultural use of dangerous pesticides, ban asbestos, and stop new oil and gas leases in the Arctic Ocean.

The 2018 ECOS® Environmental Award was presented to Senator Harris at her office in Washington, D.C., by Earth Friendly Products’ president and CEO Kelly Vlahakis-Hanks. A family-owned and operated company for over 50 years, Earth Friendly Products® is sustainable manufacturer that is the first to achieve the “trifecta” of carbon neutrality, water neutrality, and Platinum Zero Waste certification. The company uses 100% renewable energy to make its ECOS® plant-powered cleaners at its facilities in California, Washington, Illinois, and New Jersey.

Family owned and operated since 1967, Earth Friendly Products® is the maker of ECOS® Laundry Detergent and over 200 other environmentally friendly products that are safer for people, pets and the planet. Made with plant-powered ingredients, ECOS® cleaners are thoughtfully sourced, pH balanced, readily biodegradable, easily recyclable, and never tested on animals. Over 100 ECOS® products have received the coveted U.S. EPA Safer Choice certification, which means that every ingredient is the safest in its class and that formulations are effective and demonstrate sustainability without sacrificing quality or performance. ECOS®, Baby ECOS®, ECOS® for Pets! and ECOS® Pro cleaners are available at major club and grocery retailers and natural foods stores throughout the U.S., in over 60 countries and at ecos.com, babyecos.com and other online retailers.